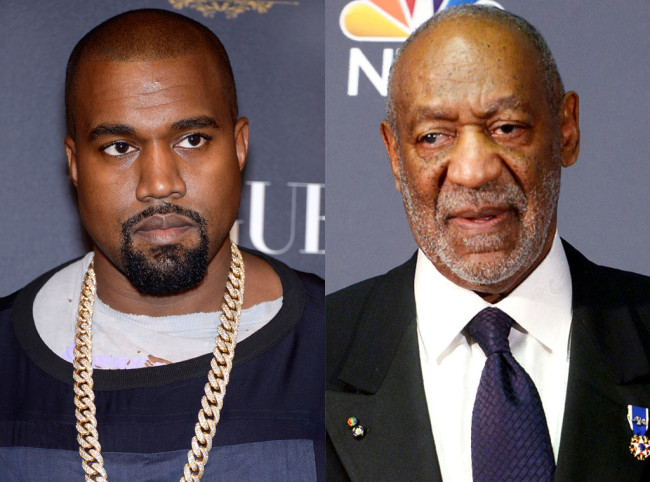 It’s not unusual to come across a Kanye West tweet that makes you raise your eyebrows, but there was one specific post today that definitely caught some attention on Twitter.

After firing off a series of tweets recently concerning a wide variety of topics (Puma, his reveal of doing a Yeezy kids’ line, an adorable photo of daughter North West), ‘Ye posted one message that used up less than half of the 140-character limit, but managed to speak volumes to many in the Twitterverse: “Bill Cosby INNOCENT !!!!!!!!!!”

Yes, West, for whatever reason, decided to share his two cents on the ongoing sexual assault case concerning the famous comedian, and didn’t offer up any other explanation beyond that—because Kanye.

Instead, the rapper went on to tweet about the Nike LeBron “LuxBron” shoe, a photo of him in the studio, a text conversation revealing a very interesting guest list (that includes “every awesome wrestler”) and more Puma talk, with the help of Kimojis.

Although this is the first time Kanye has given his thoughts on the highly publicized scandal, it’s not the first time he’s mentioned Cosby. You might remember that in his track “Facts,” Yeezy raps, “Do anybody feel bad for Bill Cosby? Did he forget the names just like Steve Harvey?”

After a year of new allegations issued against him from dozens of women, Cosby finally learned if he will face a criminal trial for charges of aggravated indecent assault. Following two days of testimony, a Montgomery County Judge has determined that the 78-year-old will go to trial after questions were raised regarding an alleged deal struck more than 10 years ago to not prosecute the actor.

Cosby was first escorted into the courthouse in Montgomery County, Pa., on Tuesday morning around 9 a.m. with a solemn disposition—a physical reflection of the serious charges set forth against him. Though accusations have been made against Cosby for many months, this is the first time criminal charges have been raised against him in light of recent claims.