No mother wants to go through the pain and heartache of trying to find their missing child.  The truth is the wondering and waiting is so difficult because the mind immediately thinks the worse has happened.  But what EarHustle411 finds interesting thing about this post is if any of these young girl were white the NYPD would have put out all kinds of APBs, Amber Alerts and smoke signals to locate them but since these young girls don’t have the “complexion for the protection” they are trying to label them as runaways.  Talk about privilege!!

NYPD should be shamed of themselves for how they are handling these cases because sex trafficking is still happening and it only takes a quick second for a child to get snatched up.  Fact is those who are committing the crime are getting bolder, trying to take girls right form in from of the parents faces.  Our young women are a hot “commodity” for being used as sex slaves and only God knows what else.  The NYPD need to get up off their collective a** and do their job!!

Read more as reported by The Frisky: 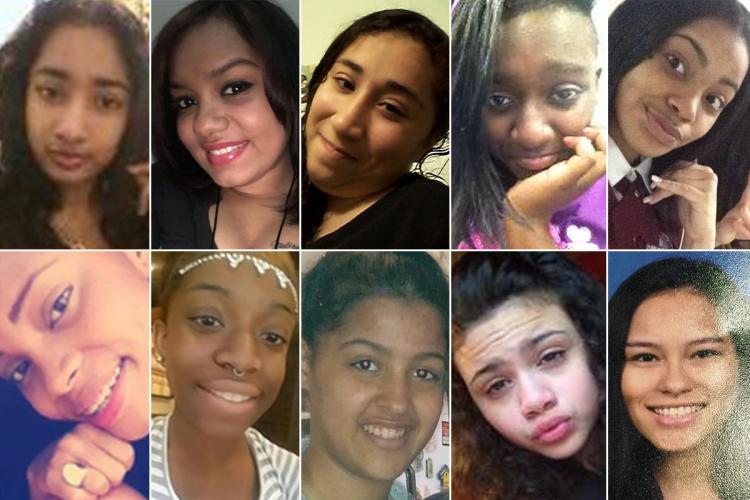 New York City councilman Andy King is worried about teenage girls in the Bronx, and every human should be happy someone is noticing what’s going on in his borough. Since July 2014, almost 14 Bronx girls have gone missing, and it’s starting to look like the disappearances are related. Maybe 14 girls over two years doesn’t sound like a lot, but that’s a f*cking lot of teenagers who just aren’t home doing their homework and worrying about summer jobs. The girls range from 12-19 years old and are all black or Hispanic. Six of them went missing this month, two of them reportedly disappearing just this week. King said in a statement this week, “Every other week our young girls are just vanishing off our streets. Something is going on. They are attractive girls. How do you get the numbers vanishing?”

According to New York Magazine, one girl, 14-year-old Sierra Rivera, was last seen June 2, when she went missing, and police say it was believed she ran off with her boyfriend. Another, 16-year-old Ashley Bissal, was last seen leaving her apartment on her way to pick up her sister from school, but she didn’t show. Another one, 15-year-old Emily Arroyo, was supposed to return home from a juvenile program April 26, but just disappeared.

Many of those teens are runaway girls, sexually abused as children.
Join the #SelahMovement and help stop the cycle. pic.twitter.com/1qp0Y10hcK

It could be anything, right? It’s easy to shrug off underserved teenage girls who disappear. The family of one of the girls said she has ADD and has disappeared twice. Maybe the girls are with their boyfriends. Maybe they were sick of the Bronx and ditched their little sisters. But it’s that kind of shitty to just assume that women up and peace the fuck out. The councilman (and the families badgering him to speak up) is making a good point. Six women missing a month — for a total of 14 over two years — is a lot for one place, even a big New York City borough. Sex trafficking is an epidemic, and the ages and frequency of the girls who have gone missing in the Bronx should make law enforcement at least keep up the theory that their disappearances could be connected.

If, in the best case scenario, the girls are just “running away” to start fresh at the age of 15, that speaks to another big problem of schools and organizations failing families and kids when they need help. Girls don’t just “run away” because they think it’s fun. It’s disconcerting that many officials immediately assume that “she ran off with her boyfriend” is a valid excuse or a reason to turn their heads and think about the next issue. The “runaway girl” trope is perpetuated in books and movies (often books and movies aimed at young women) and romanticized, but in real life, the “runaway” is often kidnapped.

Brushing off a “runaway girl” is too easy. The harder part is actually paying attention and finding them before we have to write a story about 14 teen girls from the Bronx found locked in a house somewhere.