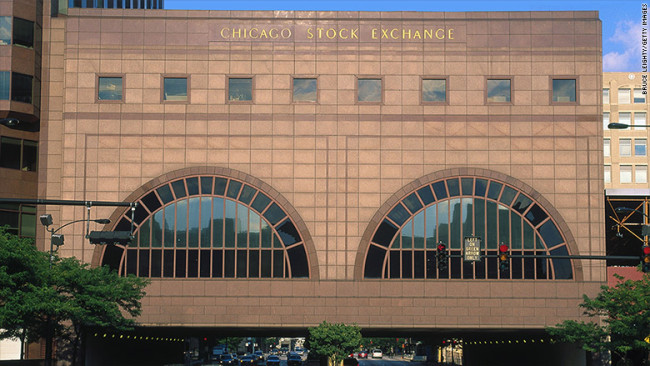 One of America’s oldest stock exchanges has just been sold to China.

The 134-year-old Chicago Stock Exchange reached a deal on Friday to be acquired by a Chinese-led group of investors.

The purchase by Chongqing Casin Enterprise Group is the latest U.S. investment made by China and would give the country a foothold in the vast American stock market.

The struggling Chicago Stock Exchange is a very small player in the exchange world whose presence is overshadowed by Nasdaq(NDAQ), the iconic New York Stock Exchange and newer entrants.

As of January, the Chicago Stock Exchange handled just 0.5% of U.S. trading, making it the third-smallest U.S. exchange, according to TABB Group.

Terms of the Chicago acquisition were not released. Privately-held Casin Group was founded in 1997 and has investments in real estate, environmental protection, finance and other areas. The Chicago Stock Exchange is minority-owned by a group that includes Bank of America (BAC),E*Trade (ETFC), Goldman Sachs (GS) and JPMorgan Chase (JPM).

It’s not clear yet if the acquisition of the tiny Chicago Stock Exchange will face any political hurdles. Some prominent lawmakers opposed the attempted takeover of NYSE in 2011 by Deutsche Boerse,(DBOEF) a German company. That deal later collapsed and NYSE was acquired by Intercontinental Exchange (ICE) in 2012.

The Chicago Stock Exchange is “such a small player. It’s certainly not as iconic as the New York Stock Exchange,” said Joel Hasbrouck, a finance professor at New York University.

There is precedent for foreign ties to U.S. exchanges. For instance, in 2007 Nasdaq merged with OMX, a Nordic exchange, becoming Nasdaq OMX Group. It has since changed its name back to Nasdaq.

Still, Joe Saluzzi, co-head of trading at Themis Trading and author of “Broken Markets,” said the fact that a foreign entity could soon control a U.S. exchange may raise security concerns.

“Does foreign ownership open up any potential for information leakage to someone who can take advantage of it? As an investor, I would raise an eyebrow,” Saluzzi said.

“As long as the information is secure, I don’t have any problem with it,” he said.

China has been on a buying spree this year. Its largest deal was a $43 billion takeover of Swiss chemicals giant Sygenta earlier this week. So far in 2016, Chinese companies have announced plans to buy 66 foreign companies worth $68 billion, according to Dealogic.

“We have one of the most liquid and efficient stock markets in the world. People are looking at us as a model they want to be part of and invest in,” she said.