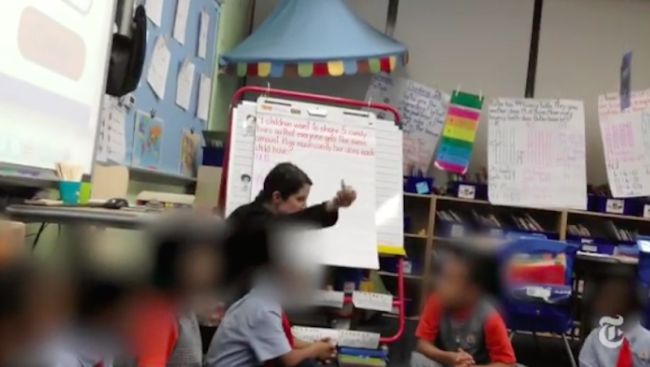 Administrators at the Success Academy—a network of high-performing charter schools in the New York area—are standing behind what they call a model teacher, who was caught on camera ripping up homework and berating a first grade student for answering a math problem incorrectly.

The video of Charlotte Dial’s first grade class, first published by the New York Times, was surreptitiously filmed by an assistant teacher who tells the paper she was “concerned by what she described as Ms. Dial’s daily harsh treatment of the children.”

In the video, Dial—a “model teacher” who trains other teachers at the school—berates a student who answered a homework question incorrectly.

“Go to the calm-down chair and sit!” Dial says sharply to a calm first grader, ripping up the child’s paper. “There’s nothing that infuriates me more than when you don’t do what’s on your paper. Somebody come up and show me how she should have counted to get her answer that was one and a split. Show my friends and teach them. Thank you. Do not go back to your seat and show me one thing and then don’t do it here. You’re confusing everybody. I’m very upset and very disappointed.”

But despite the school’s guidelines, which include mandates to refrain from yelling at students, using sarcastic tones, or giving “consequences intended to shame children,” Dial is back in the classroom after a brief, week-long suspension.

The founder of the Success Academy network, Eva Moskowitz, tells the Timesthe video was an anomaly—though anecdotal evidence gathered by the paper suggests it is not.

Jessica Reid Sliwerski, 34, worked at Success Academy Harlem 1 and Success Academy Harlem 2 from 2008 to 2011, first as a teacher and then as an assistant principal. She said that, starting in third grade, when children begin taking the state exams, embarrassing or belittling children for work seen as slipshod was a regular occurrence, and in some cases encouraged by network leaders.

“It’s this culture of, ‘If you’ve made them cry, you’ve succeeded in getting your point across,’” she said.

One day, she said, she found herself taking a toy away from a boy who was playing with it in class, and then smashing it underfoot. Shortly after, she resigned.

“I felt sick about the teacher I had become, and I no longer wanted to be part of an organization where adults could so easily demean children under the guise of ‘achievement,’” said Ms. Sliwerski, who subsequently worked as an instructional coach in Department of Education schools.

She once witnessed a girl’s humiliation as the principal mocked her low test score to another adult in front of the child.

In one instance, the lead kindergarten teacher in her classroom made a girl who had stumbled reciting a math problem cry so hard that she vomited.

She tells the paper, “It felt like I was witnessing child abuse.”

Moskowitz, for her part, does not appear to view the video as a big deal and says Dial, who ultimately received a reprimand and some sort of emotional training, is still a model teacher: “This video proves utterly nothing but that a teacher in one of our 700 classrooms, on a day more than a year ago, got frustrated and spoke harshly to her students.”

As for the crying, well that’s just what kids do, even when their teachers aren’t berating them over a missed answer, Moskowitz says:

Ms. Moskowitz said that no one at Success purposefully reduced children to tears, but that “children cry a lot” and a child crying did not necessarily mean that a teacher had done something wrong.

“Olympic athletes, when they don’t do well, they sometimes cry,” Moskowitz rationalized in a speech last month. “It’s not the end of the world.”