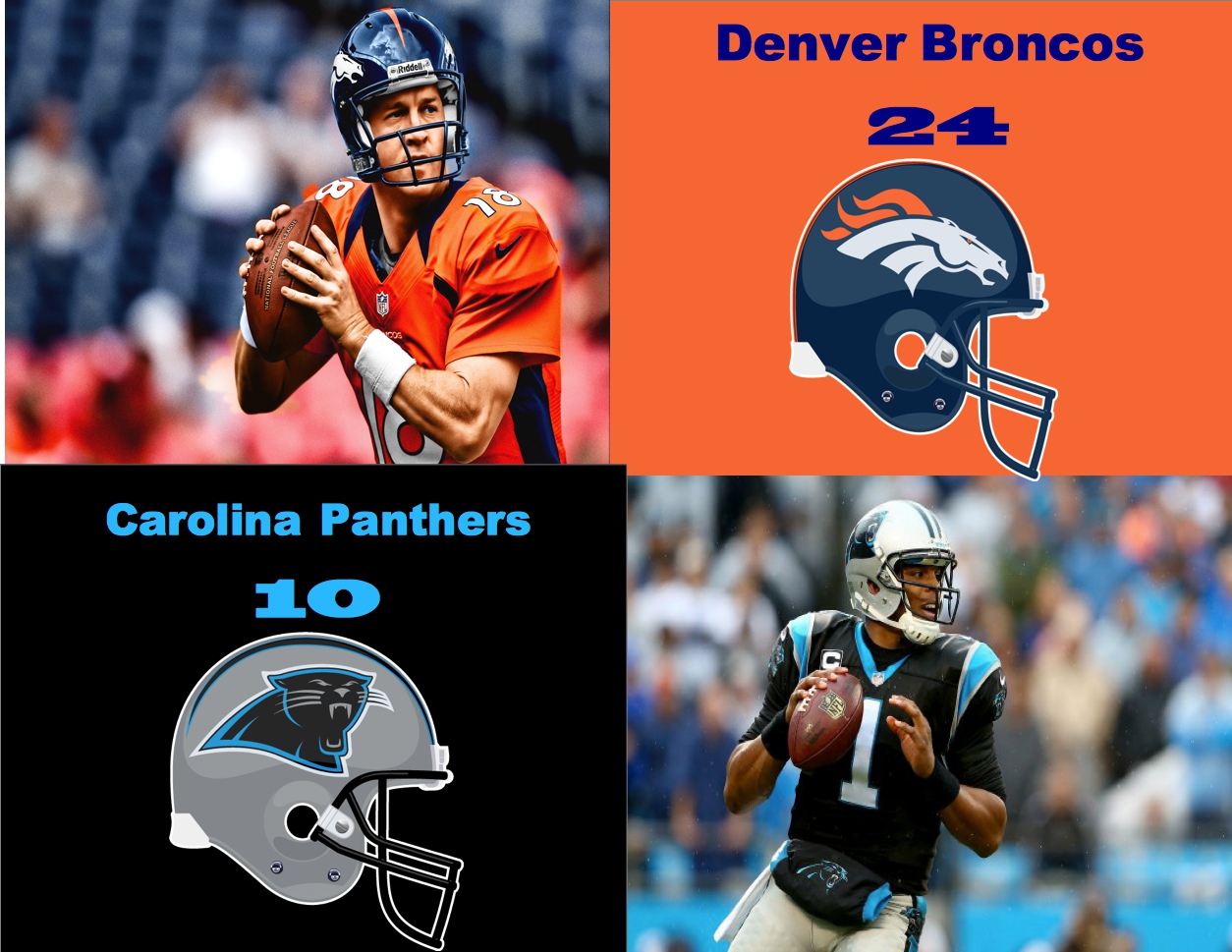 An anticipated showdown between an old-style quarterback and his new-age counterpart — not to mention two top-seeded teams — degenerated into a morass of poor throws, dropped passes and horrible pass protection, with a combined six turnovers and 18 penalties.

This 50th edition of the Super Bowl was meant to be entertaining, even historic. But perhaps the moment was too pregnant for the Denver Broncos, led by Peyton Manning in the twilight of his famed career, and the upstart, favored Carolina Panthers, represented in every way by their pioneering quarterback, Cam Newton.

An exciting matchup of opposites fizzled as Manning threw a series of wobbly passes and Newton was altogether disappointing, spending most of the game running for safety.

In a grinding, lackluster game, the Broncos, a team whose backbone is a thumping, ferocious defense, prevailed, 24-10, on Sunday. The game might prove the last of Manning’s career, but it will almost certainly not be his best remembered: He completed 13 of 23 passes for only 141 yards with no touchdowns, an interception and a lost fumble.

Denver gained 194 yards on offense, the fewest by a winning team in Super Bowl history, 50 yards below the record the Baltimore Ravens set in January 2001.

Newton, who had one of the best statistical regular seasons in the history of the N.F.L., completed just 18 of 41 passes for 265 yards. He fumbled twice, was intercepted once and was sacked six times. The teams combined to set a Super Bowl record for most sacks: 12.

Manning, who at 39 was the oldest quarterback to start a Super Bowl, said the game reflected the Broncos’ resilience.

“This game was like this season in that it tested our toughness,” Manning said. “It tested our unselfishness. It’s only fitting it turned out this way.”

Manning has hinted that he might retire, and he did not exactly shy away from the suggestion that Sunday was his last game, although officially he remained noncommittal.

“I’ll take some time to reflect,” he said. “It’s been an emotional week. I want to go kiss my wife and my kids. And I’m going to drink a lot of beer tonight.”

It was the third Super Bowl win for the Broncos and their first since 1999.

It was also the second Super Bowl victory for Manning, who won in his first Super Bowl appearance, with the Indianapolis Colts in 2007, but lost his next two, including a lopsided defeat against Seattle just two years ago.

Sunday’s result brought a crushing conclusion to what had been a magical Panthers season and dealt a sharp blow to the ascendancy of Newton, who was elected the most valuable player of the regular season and had appeared to be a new model of quarterback. Carolina had won 15 of 16 regular-season games and then stormed through the postseason with two convincing victories leading up to the Super Bowl.

But Newton, who scrambled to find any daylight, was responsible for two costly fumbles, with each leading to pivotal Broncos scores.

Newton was rattled by the relentless Denver defense, which had led the N.F.L. in sacks during the regular season. The pass-rushing linebacker Von Miller, who had two and a half sacks and forced both of Newton’s fumbles, was named the game’s most valuable player, becoming just the 10th defensive player to earn that honor.

“It’s exciting to be the M.V.P.,” Miller said, “but as a defense, we knew we could get after the quarterback and cause havoc.”

Newton was not effective throwing the football on the run — and he was often on the run — but even when he had time, he hardly looked like the superhero he likes to portray in celebrations after touchdowns, often missing open receivers.

Newton’s rushing — he gained 45 yards on six carries Sunday — jump-started the Panthers’ attack in the middle of the game. But he could not run on every play, and when he dropped back to pass, the Broncos were in his face.

Coach Ron Rivera said all the Panthers’ problems stemmed from their turnovers.

“We fumbled the ball when we really haven’t fumbled the ball this year,” he said. “There were a couple of tipped passes that were intercepted. Give them credit, but those are things we typically didn’t do this year.”

Trailing by 13-7 at halftime, Carolina showed some life with a 45-yard pass from Newton to wide receiver Ted Ginn Jr. near the start of the third quarter. But that drive ended in another mistake, an unsuccessful 44-yard field-goal attempt by Carolina’s erratic kicker, Graham Gano.

Taking over at their 34-yard line, the Broncos mounted a quietly efficient, if unspectacular, drive. Manning saw wide receiver Emmanuel Sanders sprinting uncovered over the middle and rifled a crisp pass to him for a 25-yard gain. Another Sanders reception for 22 yards soon had the Broncos at the Carolina 17. The Panthers, who were whistled for 12 penalties for 102 yards, jumped offsides to give the Broncos another 5 yards.

Manning, who threw several dangerous, unsteady passes throughout the game, could not get his team into the end zone, but he did enough to set up a 30-yard Brandon McManus field goal that put Denver ahead, 16-7.

Newton gamely tried to rally the Panthers, sometimes throwing risky passes into double coverage — and succeeding. But he was also intercepted while throwing into tight coverage, which stalled a promising Carolina drive.

The teams continued to clumsily hand the football back and forth, with Manning fumbling while trying to pass early in the fourth quarter. That turnover led to a 39-yard Gano field goal and cut Denver’s lead to 16-10.

Carolina’s last important possession began with roughly four minutes remaining. Newton, dropping back to pass on a third down, had the ball knocked from his hand by a charging Miller, who was so hard to block Sunday that the Panthers occasionally used three players to contain him.

T. J. Ward recovered the fumble at the Carolina 4-yard line. With the help of a defensive holding penalty, Denver’s C. J. Anderson soon bulled in for a touchdown from 2 yards out. A successful 2-point conversion, on a pass from Manning to wide receiver Bennie Fowler, gave Denver a 24-10 lead.

Manning ran off the field with both hands raised above his head.

In the game’s opening minutes, Manning appeared just as confident and animated. He completed three of his first four passes, for a combined 46 yards. Manning’s early passing success set up slashing rushing attempts by Anderson, and soon the Broncos were at the Carolina 14-yard line.

But the Panthers’ defense, which has allowed only one opening-drive touchdown in its last 23 games, stiffened. A first-down rush by the Broncos lost 3 yards, a Manning pass in the flat was nearly intercepted, and a third-down pass gained barely a yard. Denver settled for a 34-yard field goal.

If the Panthers looked tentative in their first drive, things only got worse on their next possession. On a second-down run, running back Jonathan Stewart was tackled behind the line of scrimmage, and he left the game with a left foot injury.

On the next play, Miller, the Broncos linebacker, stormed past Carolina tackle Mike Remmers and slammed into Newton, prying loose the ball, which squirted toward the end zone. Malik Jackson pounced on it for a score that put the Broncos ahead, 10-0, with 6 minutes 27 seconds left in the first quarter.

It was the first fumble recovery for a score in the Super Bowl in 22 years.

Carolina found its stride and transformed a budding blowout into a taut game, with Stewart, who had re-entered the game without apparent discomfort, leaping over a pileup for a 1-yard touchdown early in the second quarter.

Still, the seesaw nature of the first half continued, and in a fitting end to a rough stretch for the Panthers, Newton was sacked on the final play of the half.