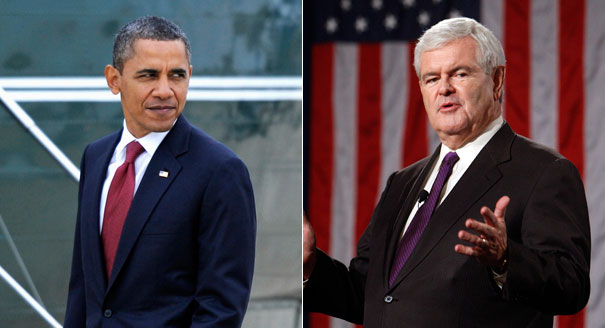 Newt Gingrich is hoping President Obama will say “yes sir” and do what white conservatives tell him to do.

During an appearance on Fox & Friends on Sunday, the former House Speaker and former Republican presidential wannabechimed in on the death of Justice Antonin Scalia and whether or not President Obama should be able to nominate a replacement during his final year in office.

Of course, picking a nominee is the job of the executive branch as laid out clearly by the Constitution. It is then the job of the Senate to hold hearings and then bring up the nominee for a confirmation vote. That’s how this works.

When Clayton Morris explained that Democrats expect Senate Republicans to do their Constitutional duty because President Obama was elected to a four year term and not just three, Gingrich said that if President Obama wants to guarantee the confirmation of a nominee he should meet with conservative Senators and let them handpick a conservative like Scalia to be the nominee.

In other words, conservatives actually think that since Scalia was a conservative that a like-minded individual should be selected to replace him, thus keeping the Supreme Court a conservative-leaning institution.

MORRIS: “Senator Leahy and others have said though this would send the [Supreme] Court into disarray, having four-four and leaving these big decisions to the appellate courts and let these decisions stand for a year. And Democrats also saying, look, President Obama was elected to a four-year term. Americans spoke. He was elected to four years, not three years. He has every right to choose a nominee.”

GINGRICH: “No, no, no. He has every right to recommend. He doesn’t have every right to choose. This goes back to the Constitution. The Senate is not obligated to approve who he recommends. I mean, he has a simple model. If he really wants to get somebody approved, sit down with Mitch McConnell and with conservative senators like Mike Lee, ask them who they would approve and nominate somebody who is in the Scalia tradition. Now, Obama is not going to do that. Obama wants to send up a radical to eliminate the Second Amendment right to bear arms, to eliminate religious liberty, to impose bigger government and more power in Washington. And that’s his right. I understand that’s what he believes. But the Senate has no obligation to shift this court for the next 30 years radically to the left in the last year of the Obama presidency.”

However, Gingrich’s demand is ridiculous. This is not how the system works. While the truth is that no one really knows how a Supreme Court Justice will rule once they start hearing cases and issuing decisions, the fact is that no president is obligated to replace a dead or retiring Justice with one that has the exact ideological views, nor does the Constitution require such a thing.

And if Senate Republicans think that’s how it should be, they would be committing a sort of political blackmail to get their own way. The bottom line is that the president picks nominees to the Court and it’s the Senate’s job to confirm them or not. We all know that if Ruth Bader Ginsburg ever stepped down from the bench during a Republican presidency that she would be replaced immediately with a staunch conservative. Republicans certainly would never entertain the thought of replacing her with an ideological copy in the name of “fairness.” So conservatives like Gingrich should not expect Scalia’s replacement to be a nominee of their choosing. President Obama will fulfill his constitutional obligation and whether Senate Republicans like the nominee or not, they must do theirs. America deserves a fully functioning Supreme Court.