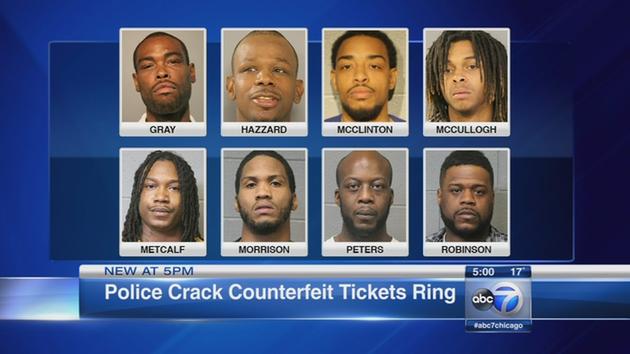 Chicago police say a tip led to a major bust involving counterfeit ticket sales to events at some of the city’s biggest venues.

Police said the investigation has been 14 months in the making. It started as a result of one person reporting they had bought a fake ticket on Craigslist and on Tuesday, it resulted in 16 gang members being charged with forgery.
Investigators said this was a wide-ranging counterfeit ticket scheme for games, events and concerts at Chicago’s Soldier Field, the United Center and Allstate Arena in Rosemont.

According to police, the defendants would print up fake tickets for popular, in-demand events that looked and felt just like the real thing. They then posted them for sale online and met up with their unsuspecting victims in public places to deliver them. Gang members would make up to $60,000 per event off of fake ticket sales, and police say so far they’ve identified up to 1,500 people who got taken in by them.

Sixteen people have been charged. Eight have been arrested so far in an operation that began Tuesday morning. All of them are documented gang members.

“We know that the money is being used to finance the gangs, finance their operations. They are using the money to purchase weapons, they use them for bond when gang members are arrested, they use them for attorney fees when gang members are arrested so pretty much any gang operation of the street gang is being financed by these ticket sales,” said Chief Anthony Riccio, bureau of organized crime.

Police said this is important because it is one more way to cut off the gangs’ financing. So far, the arenas have turned over fake tickets dating back to 2002.

Police continue to investigate. It’s expected that even more people will be charged in connection with this at a later date.