5-Year-Old, Dalton Shaw, of Savannah, Illinois had a birthday last week and instead of doing what any 5-year-old on their birthday would do and ask for gifts for himself of course, he kindly turned his birthday into an opportunity to give back to rescued animals in shelters. 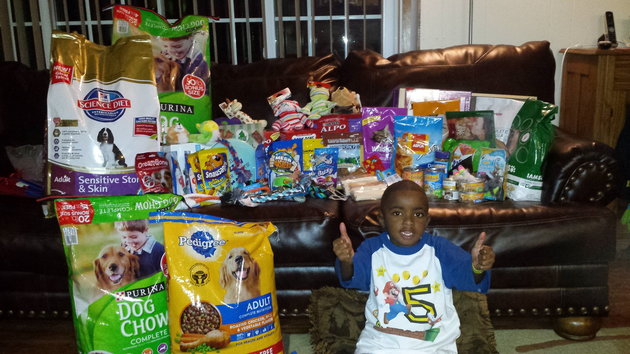 Dalton asked that anyone who would attend his birthday party gathering, if they could bring supplies and food for the animals at the local rescue shelter in his area. A large response was answered and his father snapped a photo of Dalton, proudly posing next to the generous support of food and supplies that he was given.

Over the past Dalton and his family have given to shelters, collecting and donating blankets and such. Dalton’s mother, Stephanie Shaw, suggested to Dalton that it might be a good idea to give back since he had received a good Christmas this last year. Dalton immediately responded and said that he wanted to help the animals.

In addition to food and supplies, he was able to raise about $255 worth of donations, which he seemed extremely proud of doing. Initially the family expected small things here and there like a little bag of treats, but the response was definitely overwhelming, according to Shaw.