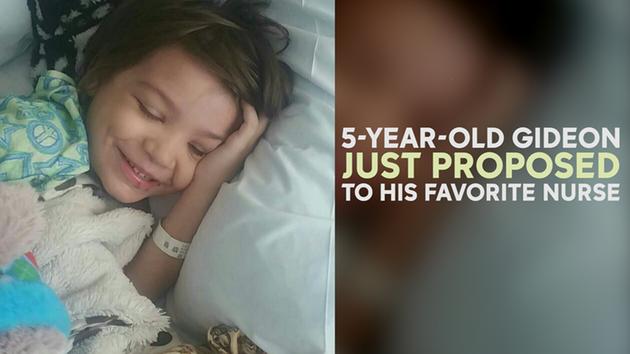 Five-year-old Gideon took a leap of faith when he dropped down to one knee and asked his favorite nurse for her hand in marriage.

Gideon Robinson was diagnosed with lymphoblastic leukemia in November, 2015. During his stay at Rady Children’s Hospital in San Diego, he became fond of one of the nurses whom he calls, “Tall Sarah.”

One day, Gideon inquired about Sarah’s relationship status. One of the other nurses mentioned how she wasn’t married to which Gideon immediately responded, “I’ll marry her.”

Gideon, with help from his mom and several other workers at the hospital, planned to surprise Sarah with the proposal. Gideon even made a custom ring out of pipe cleaners and a bead.

As Sarah meets Gideon in the hospital lobby, he dropped down to one knee and asks the million dollar question, “Will you marry me?”

Sarah promptly responsed by saying, “Of course you can be my hospital husband!” as the room erupted in applause.

Gideon credits his love of Sarah to the piles of Legos she brings him, which are his favorite toys.