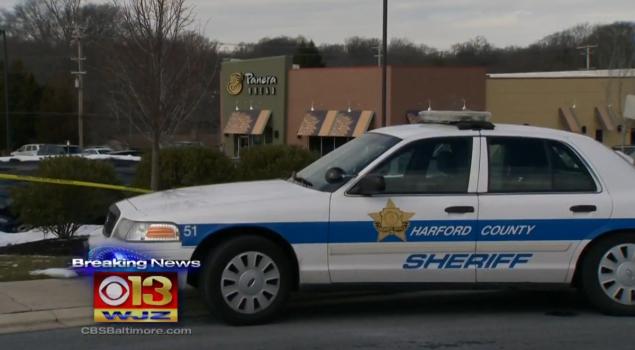 The shooting happened just before noon, in a shopping center near Veterans Memorial Highway. Officials say the first deputy was dispatched at 11:46 a.m. and encountered the suspect inside a Panera, where shots were fired. The deputy was struck.

The suspect fled the restaurant after the shooting.

A second deputy responding to the scene located the suspect and was also hit by gunfire. Both deputies were sent to hospitals, including one to Shock Trauma, before they succumbed to their injuries.

The suspect, identified as 67-year-old David Brian Evans, was shot and killed by law enforcement.

Officials say there were outstanding warrants in two states for the suspect’s arrest, including a criminal warrant out of Florida for assaulting a police officer and fleeing and eluding. The second is a Circuit Court civil writ issued by the Circuit Court of Harford County.

Police are not looking for any additional suspects.

The last fatal shooting of an on-duty police officer in the history of the Harford County Sheriff’s Office happened in 1899.

After the deaths were announced, condolences and messages of support from lawmakers and law enforcement departments across the state flooded social media.

Anytime law enforcement or first responders lose their lives in the line of duty, it is a tragedy and today’s violence in Abingdon and the deaths of two Harford County sheriff’s deputies is nothing less than absolutely heartbreaking. Our administration is committed to assisting Harford County during this investigation, and the Maryland State Police are working closely with local law enforcement to provide support as needed. “The First Lady and I send our most sincere thoughts and prayers to the families and loved ones of the brave deputies who made the ultimate sacrifice today for the community they selflessly served. It is my hope that their commitment and dedication to law enforcement and protecting others will be remembered and will forever serve as an inspiration to others